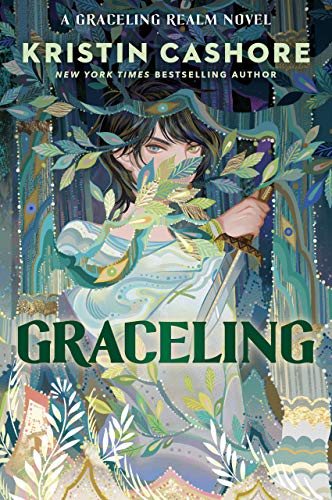 I’m not sure how I haven’t picked this one up sooner. It has: a girl gifted with killing men with her bare hands (who is also a general badass), a supportive, healthy romantic relationship in YA fiction, and a compelling fantasy world that is bursting with potential.

Katsa’s such an interesting character, and one I don’t think we see a lot in young adult fiction.

She’s extremely strong, but she has difficulty relinquishing any sort of control in her life to other people. For most of her life, she’s depended on herself and herself only for her wellbeing.

But she’s also incredibly admirable–and instantly relatable. By night, she saves innocents across borders and trades in information to help other people. Even within the constraints of her situation (no spoilers!), she finds a way to be good.

Enter one prince with eyes of gold and silver. But the cool thing about Po (other than him being a general delight) is he doesn’t push past Katsa’s boundaries. He’s understanding and completely supportive. He doesn’t save her (in fact, I’m pretty sure she saves him several times).

Add to this the fact that Po is also blessed with some pretty cool abilities himself (again, I won’t spoil anything!), and Graceling has quite a bit going for it.

Oh, and I would be remiss if I didn’t mention the new covers for the Graceling Realm series. They’re an absolute feast for the eyes! I mean, just check out Winterkeep.

What do you think of Kristin Cashore’s Graceling? Sound off below!