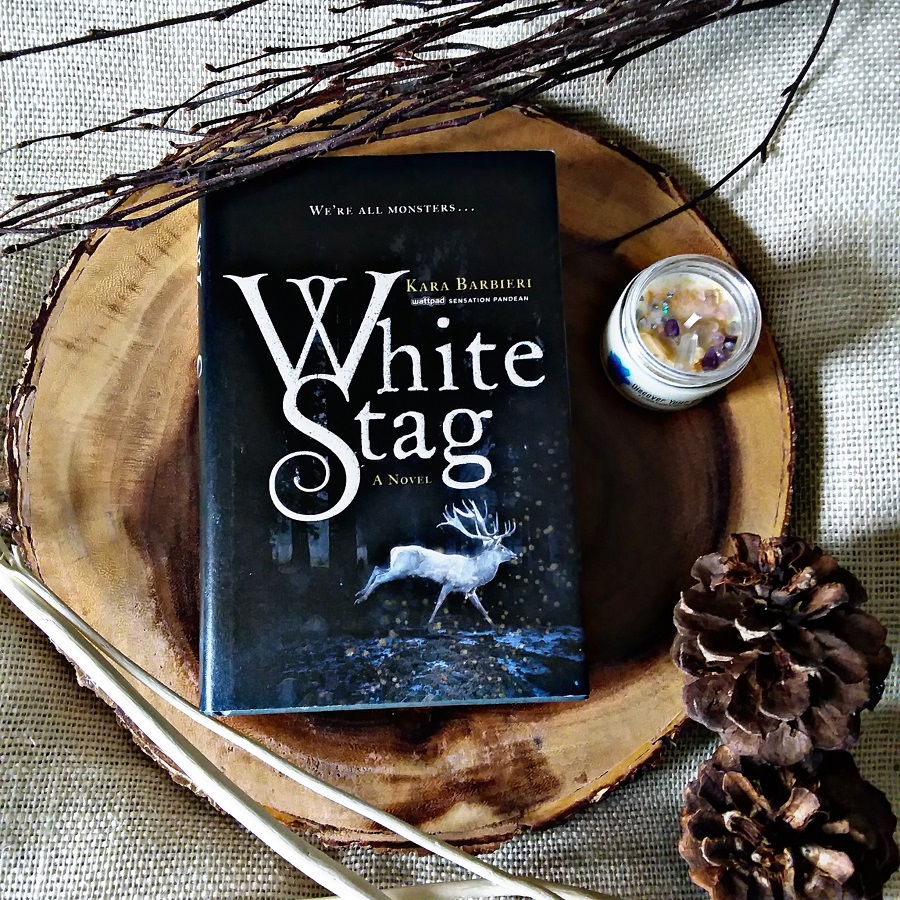 Happy holidays, readers! Welcome to the 4th day of the 12 Bookish Days of Christmas Blog Hop hosted by the YA Sci-fi & Fantasy Addicts Blog! On this stop, we’re drinking the most decadent non-dairy hot chocolate you’ve ever had while reviewing a winter-themed book to curl up with. Plus, there’s a stocking stuffer for every reader who has been nice this year (no dog-eared pages!).

Below, you’ll find a handy list of links to the other days of Christmas.

Day 7 – A Christmas Playlist to Read To

Day 12 – A Soul as Cold as Frost Review + Coffee Recipe

Content advisories: this book contains mentions of rape and depictions of violence and torture. Moderate language use and mild intimacy.

In a land of perpetual winter where beautiful, brutal creatures known as goblins hunt, a girl raised to be the male heir of her family is stolen. For a hundred years, she will live among them. Surviving.

Until the old goblin king dies and a hunt for game like no other begins.

White Stag by Kara Barbieri is a book for those that crave a read that’s dark and beautiful and deadly twisted. After all, life in the Permafrost is not for the faint of heart!
Which brings me to the worldbuilding. White Stag is a winter wonderland, minus the incessant carolers. Everything about this world screams cold, cruel, and detached, but Barbieri has done this in a way that you feel plunged into a winter forest along with Janneke.

Speaking of her, one of the best things about this book is the main character, Janneke. She’s a survivor, and her experiences have shaped her into a ruthless, badass huntress. She’s a human, yes, but she’s as good as any goblin who would dare pick a fight with her.

As for the other main character, I’ll just say that if you liked someone called Rhys, you’ll like the white-haired goblin named Soren.

White Stag is all about what makes a monster and what happens when you discover you might just be the monster of your own story.

Check out White Stag on Goodreads

Happy holidays! You deserve a free book. Grab your copy of the prequel to The Crest of Blackthorn series.

“I will become the monster they expect. I will be the nightmare that nightmares dread.”

If Lavine doesn’t stop a growing horde of plundering murderers, they’ll use her little sister as a weapon of destruction.

She has the chance to rid the world of raiders once and for all when she discovers the secret to unlocking the most powerful part of her dark magic.

Too bad the price might be her own soul.

More or less dark chocolate may be used if desired. For the best taste and consistency of the drink, ensure the chocolate is of high quality.

For a milk chocolate-tasting alternative, replace dark chocolate with one tablespoon of cocoa powder.

Enter below to win over $600 of books, merch, and giftcards! Giveaway by YA Sci-fi and Fantasy Addicts.

Will you be one of the three winners? I hope so!