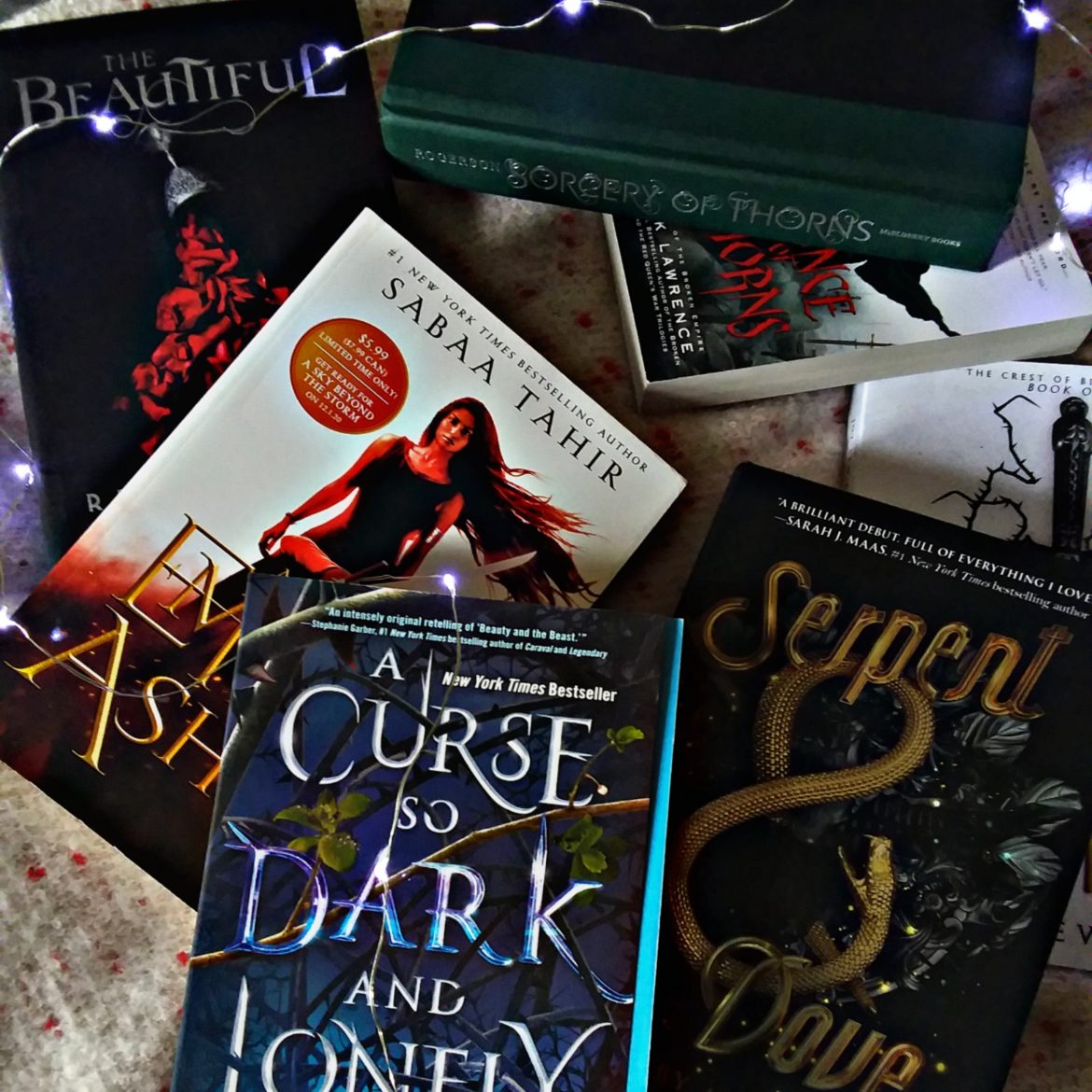 According to my Goodreads, I read 22 books in 2020. Although it’s short of my goal for the year, I consider it a win after writing roughly 200,000 words during a pandemic. Earlier this year, I briefly quit both writing and reading (don’t worry, I’m back to both!). I’ve since made peace with my worries as best as I can by getting back inside the many wonderful worlds of fiction.

But enough of that–I’m grateful that 2020 exposed me to some amazing reads in young adult fantasy.

For all these, I couldn’t choose just one. But for each award, I’ll recommend different books for different readers. Let’s begin!

Although both of these are romantic fantasy reads, when you consider their tone, they’re polar opposites. Both are worth the read!

Isobel and Rook’s world is lush, but not only in a physical sense. Rogerson’s prose is breathtaking, and her take on the fae feels both true to old folklore and like a breath of fresh air.

By the end of this book, I was on the edge of my seat, wondering how in the world this story could be wrapped up in just one book. You’ll have to read it to see!

For readers who want a beautiful world wrapped in delicious fae tropes, check out An Enchantment of Ravens.

Ever since reading this one, I’ve seen a lot of heated discussion over the heroine. Specifically, some folks say Alessandra’s unlikeable, unrelatable, and generally irredeemable.

I have to disagree!

Sure, she’s not your typical young adult protagonist. And I’m not denying that our girl has a lot of faults. But I can believe in what she fights for, and I can relate to the hunger for more that burns in her. More than anything, Alessandra is a nuanced character.

To pull from my earlier review (which can be found here), The Shadows Between Us is an ode to every underestimated woman and girl out there.

For those who crave darker reads and unconventional YA heroines, check out The Shadows Between Us.

For this award, I’m considering character arcs, plot progression, and overall quality of story across books.

This is another comparison of similar-yet-unlike books. Both series follow a morally gray, utterly badass main protagonist who finds himself/herself in tighter and tighter spots. You don’t want to get on the bad side of either Kaz or Jude.

Talk about character arcs! Jude really bloomed across her series. By the last book, The Queen of Nothing, she’s a completely different person from the girl we saw at the opening of The Cruel Prince.

She’s one of my favorite heroines in YA fantasy, hands down.

On the other hand, Kaz’s opening scene perfectly sets up the kind of person he is. He gets some major change, as well (just look at that last scene in Crooked Kingdom), but I believe he started out more distinct as a character than perhaps Jude did.

This is all splitting hairs, however. Both series are worthy of the Best Series Award.

Read Bardugo’s series if you want to explore the gritty world of Ketterdam with a wide crew of characters in their quest to control the release of a new, insanely powerful magical drug.

For a dark twist on the fae filled with betrayal, murder, and one epic enemies-to-lovers romance, check out The Folk of the Air series.

You know what, read these series even if you aren’t on totally on board with those things above–I’m convinced any fan of young adult fantasy should love these books.

This one is a complete toss-up. In 2020, I took a chance and started listening to more audiobooks. It’s been one good thing to come out of the year, at least!

For this award, I’m focusing not only on how well the narrator portrayed the protagonist, but also their performance of the supporting cast.

This one in particular was incredibly well done! I’ve come to find that I love audiobooks with a little bit of music in them. It really drove home the tone of what was happening in the epilogue: it was beautiful, mysterious, and dangerous.

Without spoiling things, I can say our main character got what she wanted–but is that really a good thing? This tension perfectly leads into the next book.

More to the point, Kelly’s performance of a young titular fae prince was what convinced me this was one of the best. She captured Cardan’s essence perfectly.

Another parallel between two winners: Fortgang’s performance of The Darkling was entrancing. That alone made me glad I listened to the audiobook version. Through Fortgang, he comes through as the brooding, spellbinding leader of Grisha and commander of shadows that he should be seen as.

Fortgang narrated the rest of the cast (and there’s a few of them) just as well. Each character feels distinct and memorable. What’s more, I feel she handled the characters’ accents effortlessly. I mean, this can’t have been an easy book to narrate, but she makes it look easy.